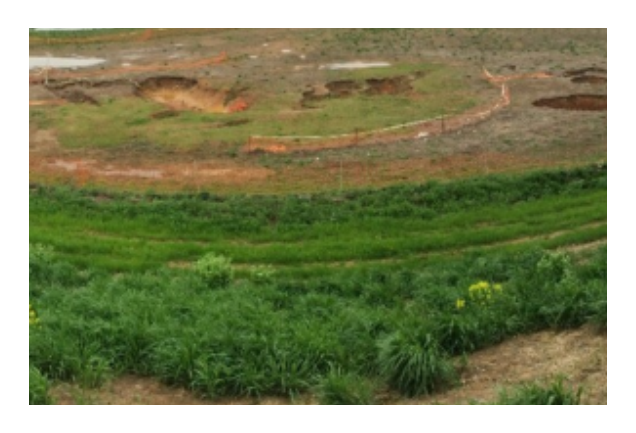 Several challenges arise when building in an area that has Karst topography.  These areas prominently occur in areas where the bedrock has carbonate-rich rocks like Limestone, Dolomite, and Gypsum. These rocks under the right circumstance will dissolve and leave voids beneath the ground surface. A sinkhole occurs when the soils above the void can no longer support their weight. Sinkholes can happen slowly or rapidly. Before constructing in these locations, subsurface soil investigations and geophysical studies are conducted to identify if the site is underlain by carbonate-rich bedrock, formed sinkholes, pinnacles or valleys. These studies may not find evidence of any issues however, that does not negate the possibility that sinkholes may occur during construction.

During construction and earthmoving operations, some of the overburdening soils can be removed from the surface of a sinkhole or allow for surface water to reach and begin dissolving the carbonate-rich rock. Throughout the life of the project, developers should keep a lookout for signs of sinkholes forming. These signs can be as subtle as a small round shape depression forming, a loss of soil exposing a void, or finally, the sinkhole opening. The good news is that people have been building in areas where sinkholes exist and have several ways of taking care of them. When a site is in a karst topography area, engineers include information and details on how have them remedied.

<< Temporary Stabilization What is a SWPPP? >>