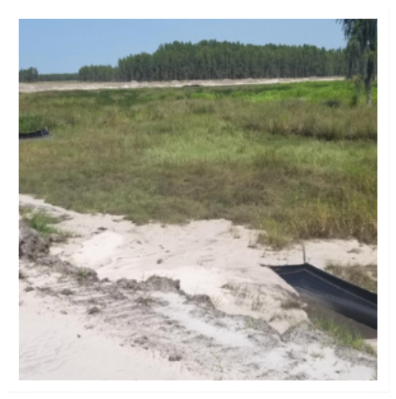 Arguably one of the most important Best Management Practices (BMP) on a construction site, whether residential or commercial, is the installation and maintenance of perimeter controls. Perimeter controls may vary depending on the needs of the construction site (ie. Silt fence, fiber logs, hay bales, trackout control device, etc.) Perimeter controls are generally the first temporary BMP to be installed and the last to be removed. It is important to thoroughly inspect perimeter BMP’s to ensure the integrity and effectiveness during each NPDES inspection, routine and rain event. (National Pollutant Discharge Elimination System) Any issues that are found during an inspection should be addressed as soon as possible to lower the potential for sediment to leave the site.

The most commonly used perimeter BMP in Florida is silt fence. Silt fence is a porous material held in place with wood and/or metal stakes that is designed to keep sediment on a construction site during soil disturbing activities. Silt fence material color can vary, but most silt fencing is typically black. When inspecting silt fence, issues that should be noted are, torn/ripped fabric, broken stakes, erosion under or around the fence and sediment build up that is greater or equal to fifty percent of the height of the fence. Once the fence reaches fifty percent capacity, it can easily collapse from the weight of the sediment and allow sediment to run off the site, as shown in the photograph below.

“Keeping the soil on a construction site, rather than letting it be washed off into natural water bodies (e.g., streams, rivers, ponds, lakes, estuaries) prevents the degradation of aquatic habitats and siltation of harbor channels.” (EPA) Perimeter controls are important to install, inspect and maintain as they are the “last defense” in keeping sediment on site and out of our natural bodies of water.

<< Wondering About Social Distance? When and When Not to Use Dust Palliative >>